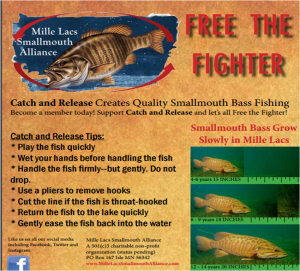 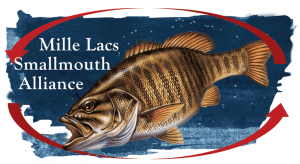 (Dec 4, 2015) Isle, Minn. — Local homeowners, business owners and concerned anglers have joined forces in Minnesota to form a new non-profit organization: the Mille Lacs Smallmouth Alliance. Recently electing a dedicated board of directors, the organization is starting work on its mission. This non-profit (pending official 501c3 status) is dedicated to rebuilding, preserving and maintaining Mille Lacs as a world-class trophy smallmouth bass fishery. The work includes educating fishermen, local businesses and visitors to the lake about the benefits of catch and release and advocating (with conservation officials) for sound bass-management practices. The organization has set forth a premise that a healthy, trophy smallmouth bass fishery contributes to the economic vitality of the Mille Lacs Lake area through added tourism dollars.

For example, B.A.S.S. recently announced its Angler of the Year tournament will travel to Mille Lacs in September of 2016. The economic impact will provide over $3.4 million to the region. This improves overall property values and maintains a robust community. Taking care of a precious natural resource is just the right thing to do.

“We’ve done a lot of initial work to get organized,” said Jim DaRosa, serving as the first President of the new Alliance. “We have a board of directors in place consisting of local anglers and business owners. People are coming together to create a unified voice.” A website is now live at www.milleleacssmallmouthalliance.com with the honorary board members including: Al Lindner, Ron Lindner, Ron Schara, Mark Zona and James Lindner.

“There are very few smallmouth fisheries on the planet that offer catch rates and size classes like Mille Lacs Lake. It is truly a ‘must go’ or ‘bucket list’ destination for anglers across the country,” said board member Tony Roach, long time guide and host of the Tony Roach Outdoors television show. “It would be an absolute tragedy to see this resource vanish. The Mille Lacs Smallmouth Alliance will be a great organization ensuring this world-class fishery is here for generations to come.”

Additional work is planned in the months ahead:
• Free the Fighter flyers will be printed and distributed to area resorts that are catch and release “bass friendly.”
• A BRONZEBACK BLOWOUT event will be the Alliance’s first fundraiser, slated for Saturday, April 23, 2016 at McQuoid’s Inn and Resort in Isle, Minnesota. Save the date.
• During the Northwest Sportshow (March 30-April 3) in Minneapolis, Minnesota, the Mille Lacs Smallmouth Alliance will have an informational booth at the show educating anglers on catch and release and accepting membership applications.

The need for the organization came out of changing regulations on Mille Lacs over the last few years; the change in the creel limit of smallmouth bass created an urgent cry to minimize the harvest. “We need to focus on two main things: educate anglers about the importance of catch and release and to advocate with the DNR for Mille Lacs’ smallmouth regulations,” board member George Liddle said. Throughout the rest of the state, the bass season is limited to catch and release in the month of May and from mid-September through end of February. The current Mille Lacs regulations allow six per person in possession with one over 18 inches and the May and winter months allow a daily possession. “We want to have the same season as the rest of the state,” Liddle continued. “We’re already seeing signs of over harvest.”

“This is a very special fishery with national significance to bass anglers everywhere. It’s just incredible,” said DaRosa. “Mille Lacs needs to be protected. It may take several years [for the DNR’s work] to restore walleye to the levels they once were; we want to be proactive and make sure the smallmouth are healthy and sustainable while the walleye population is being restored.” The Alliance is not about petty, divisive politics. World-class walleye and smallmouth bass fisheries can co-exist with proper management.

The work of establishing a non-profit business, electing a board of directors, applying for 501(c)3 status, creating a logo and building a website are all initial steps in the right direction. “We discovered there are other smallmouth alliances across the country that share similar goals,” DaRosa said. “They have been a great source of knowledge and provided us with direction. We are thankful to the Wisconsin and Missouri Smallmouth Alliance organizations in particular.”

Mille Lacs has been consistently included in the top ten of smallmouth bass fisheries across the country. In this article by Wired2Fish, Mille Lacs ranked number four overall: www.scout.com/outdoors/wired2fish/story/1573452-2015-top-15-smallmouth-bass-lakes.